Memory games exercise the brain. It's helpful to think of the brain like a muscle: the more we condition it, the stronger it becomes. Memory games will not only strengthen the brain, but they also boost attention levels, reading ability, and reasoning skills. The more we practice the act of concentration - which any good brain game requires - the more we "exercise the muscle." 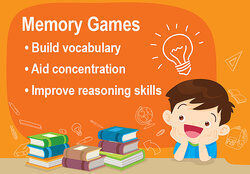 Below, you'll find 7 fun memory games for kids. This selection of vocabulary games to improve memory is perfect for helping children and students boost their ability to remember important information.

This memory game can build vocabulary and be played as early as first grade.

To make sure your little learners really perfect their rhyming game, check out these Examples of Rhyme. They cover the different types of rhymes, including assonant rhyme, ear rhyme, identical rhyme, and more.

This is a good game for the classroom, second grade and above.

To make the game easier, you can include a word bank either on the board or on the worksheet, in a scrambled order, so participants know which words to choose from.

This is another great game that can be started as early as kindergarten.

This is a great game to play in the classroom, at home, or when traveling on a plane or train. Really, it can be played anywhere there's a tray or table. Since we start to teach money skills in the first grade, you can consider introducing this game then.

As you play, feel free to toss in a few of these Idioms About Money.

This one's a classic and can be played as students start to develop stronger memories. Third or fourth grade is a nice time to put this classic into the rotation. It's a memory game that tests recall with a long list of items.

For more games like this one, check out these Vocabulary Games to Play in Groups.

This game is similar to the memory train. However, it takes on a greater complexity as the game continues. As such, the storytelling game is more suitable to fourth or fifth graders.

Word lists lend themselves well to memory games. The rote-memorization offered by word lists engages our brains in active recall. With a solid list of vocabulary words, you can create a matching game out of flashcards.

Use the template below to create your own set of flashcards today! Download the PDF template file. Then, you can type in your words before printing, or print and handwrite vocabulary words. For younger kids, you could add picture pairs and label them accordingly.

Here at YourDictionary, we have extensive word lists you can use for your flashcards: simple three-letter words, words to describe music, collective names for animals. The lists go on!

We hope you'll have some fun exploring the never-ending depths of your brains with these memory games. Remember, the more we exercise our brains, the stronger and more resilient they become. Wouldn't it be great to have lightning-fast recall?

Before beginning your strength-building journey, take a read through Types of Memory. It'll help you make the most out of your little learners short- and long-term memories!