What Are the Different Types of Memory?

Memory is the power of the brain to recall past experiences or information. In this faculty of the mind, information is encoded, stored, and retrieved. In the broadest sense, there are three types of memory: sensory memory, short-term memory, and long-term memory. 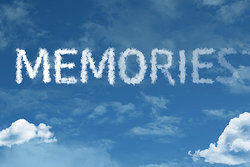 What Are the Different Types of Memory?

Typically, when we think of the word "memory," we're referring to long term-memory, like remembering the quarterback for the New York Giants. But, our minds also possess sensory and short-term memory. Not all memories are the same; the different types function in different ways.

Sensory memory is our shortest form of memory. It's very fleeting - no more than a flash. Sensory memory acts as a buffer for stimuli received through the five senses. These images are accurately retained, but only for a brief moment in time, typically less than half a second.

Have you ever waved a sparkler in the air and seen a trail of light behind it? That's sensory memory: an image, a scent, a sound. Just as it sounds, sensory memory works with our senses to recall some quick flash of information.

There are three main subcategories of sensory memory. Let's take a look.

This refers to immediate visual memories. Iconic memory is also very, very fleeting. It's how the brain remembers an image you just saw moments ago. Say something flashed on your computer screen for less than a second. Your brain will "remember" what it saw very briefly, even after the image is gone. Beyond the 0.5 second mark, anything you "remember" goes on to short-term memory.

Sometimes referred to as auditory sensory memory, echoic memory pertains to audio memories. Overall, echoic memories are stored slightly longer than iconic memories: about four seconds. If you hear a few notes of a melody, you may able to hum it back immediately after it finishes. However, if you were asked for the melody again in a few minutes, you may be unable to remember it unless it transferred to short-term memory.

This refers to memories involving the sense of touch. Just like with iconic and echoic memory, haptic memory is equally fleeting. If you run your hand over a rough surface, you'll remember the exact sensation you felt for a few seconds. After that, the memory needs to be encoded into short-term memory for later recall.

What about the other two senses: olfactory (smell) and gustatory (taste)? Even though we often hear that our sense of smell is our strongest link to the past, ironically, the above three subcategories are more extensively studied in the context of sensory memory.

Whether you're dealing with sight, smell, or taste, remember that sensory memories are fleeting. They're nothing more than a flash - a flash of a sparkler or an image flitting across your screen.

If you're looking for tips and tricks to boost your recall, check out How to Improve Your Memory.

Short-term memories are slightly less passing than sensory memories, but they still get dismissed after a few minutes. The label is quite apt, given their function. Short-term memory is the part of our brains that holds onto information until we need to recall it. If we make mental lists before we run to Target, it's our short-term memory that will help us recall the fabric softener or the folding chair.

Short-term memory, often interchanged with the term "working memory," is very temporary. It has a low capacity, as the information being processed will either be quickly dismissed, or entered into our long-term memory bank. It's sort of the precursor to long-term memory, which has many distinct facets with varied functionality.

This is the reason why you might continually repeat a phone number as you walk toward your phone; you're keeping the number in your short-term memory.

Lilly parked in the garage on Main Street. In order to pay for parking, she had to remember her parking space number as she walked over to put money in the meter. Once she got the ticket, she placed it on her windshield and walked across the street to meet her friends for dinner.

If you'd asked her what her parking space number was halfway through dessert, she might not be able to tell you.

Long-term memory is the brain's system for storing, managing, and recalling information. It is very complex with different functionality. As sensory memories only flicker for less than a second and short-term memories last only a minute or two, long-term memories include anything from an event that occurred five minutes ago to something from 20 years ago.

There are many different forms of long-term memories. Sometimes they're conscious, requiring us to actively think in order to recall a piece of information. Other times they're unconscious, simply appearing without an active attempt at recollection, like remembering the route from home to work without actively thinking about it.

Let's take a look at some of the most prevalent forms of long-term memory.

Sometimes referred to as conscious memory, this is the intentional recall of information.

For example: Every time Katie fills out a college application, she must consciously recall her full address, telephone number, and social security number.

A variant of explicit memory, this involves the retention and recall of important facts, such as dates, events, and information.

For example: As August rolls around, Katie knows it's time to buy a birthday card for her best friend Sara. August 30th is Sara's birthday.

A form of declarative memory, this includes an ability to remember firsthand experiences from your life.

For example: Katie's mom calls to ask what she did over the weekend. Katie must think back and recall Saturday's frisbee tournament, plus the church meeting she attended on Sunday, in order to tell her mother about them.

For example: Katie's mom loves the NY Giants, but she can never remember the quarterback's name. Julie constantly has to remind her that his name is Eli Manning.

Sometimes referred to as "unconscious memory," implicit memory includes the retention of information from a moment in time that can't specifically be recalled. You know how some things just "ring a bell"?

A form of implicit memory, procedural memory is the ability to recall how to do things, from riding a bike to driving a car.

For example: Sasha used to get in her car and run through a series of safety checks before driving. Are her mirrors properly positioned? Is her seat belt fastened? Now, she just gets in and performs those routine checks automatically without even thinking about them.

Auditory memory helps us retain information based on the sounds we hear. When a child is learning about the sounds letters make, it's their auditory memory that will allow them to remember that the letter "B" makes the sound we hear in the word "ball."

So, as a child learns his letters, there might be one page in the book that shows the letter B. The parent or teacher will model the sound the letter makes. Then, on the next page, they might find the word "ball." In order for the child to be successful, he'll have to remember the "B" sound from the previous page.

Meanwhile, visual-spatial memory is what will help the child associate a picture of a basketball with the word "ball." A child's ability to label that round, orange object as a basketball will rely upon the visual cues they've been given.

It's All in the Mind

Isn't the mind a fabulous study? It serves so many functions. It works as a receptionist in the form of sensory memory, admitting flashes into the mind. It acts as judge and jury, deciding which facts enter and exit quickly through the short-term memory bank, or advance into long-term memory.

The mind stores information for us to reach in and grab, whether we intentionally put it there or don't even realize it's sitting there. The next time something "rings a bell" for you, give your mind a little pat on the back. With a greater understanding of how our memory works, take a stab at these six ways to increase your vocabulary. A strong memory is paramount to a robust vocabulary.