Words That Start With U For Kids

The letter U is an interesting beast. Both of English's main parent languages, Latin and German, use it differently than English does. Latin turns V into a vowel that's almost but not quite U. German does strange things to the sound. English keeps things simple, yet U is by far the rarest of the English vowels, 13th in overall frequency. That may be clear in the following U word for kids lists: sometimes words may be trickier or more obscure than expected, simply because only so many words start with U. Follow useful lists of U words for kids from preschool through to the 5th grade. 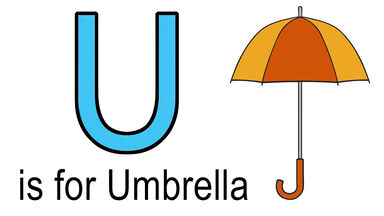 u words for kids example of umbrella
Advertisement

Our U words for kids will challenge your preschool-level students. That being the case, this list represents an important opportunity. For pre-literate kids, word lists serve the all-important goal of linking a sound, heard and spoken, with a shape on a page. These words that can easily be recognized by pictures can help preschoolers start to recognize the letter U.

Trace the U Worksheet

Linking the U sound, which in its pure form is as old as a baby's first coo, with the U letter is a vital moment in linguistic development. We've developed a trace-the-letter letter U activity with that in mind. Practice makes perfect!

Kindergarten Words That Start With U

Match the U to the Picture Worksheet

Since kindergartners are just getting the hang of the letter U and the sound it makes in reading, you can challenge them with a worksheet. Have them match the word to the picture.

Early Elementary Words That Start With U

As of first and second grade, your students should be catching up to this challenging U vocabulary. This is an opportunity to engage them with the real-world significance of the words they're learning. This list for first and second graders may challenge beginning readers. At the same time, they're all words your early readers will encounter, and they present an opportunity for children to start noticing linguistic trends. They also get to start playing with the different long vowel sound like union and the short vowel sound like unreal.

You can also discuss the subset of the words above that begin with un-. Discuss how the un- prefix turns a word into its opposite. Give students a group of words and allow them to explore how adding un- makes them the opposite like happy and unhappy.

Late Elementary Things That Start With U

Third, fourth and fifth graders may be familiar with at least a few of these words. Context is key. Linking unaware and unconscious with the same prefix, or connecting the less-than-obvious unify and unique, will give your students reason to take an interest in their vocabulary. Students begin to engage more with text, developing more contextualized thoughts and feelings about words and their usage.

Etymology of U Words for Kids Activity

The late elementary word list presents students with concepts and origins to explore. Umbra and umbrage both come from the Latin word for shadow, as does umbrella. Uplifting and uprising look like they should be synonyms, but in fact, aren't even the same part of speech. Provide students with this list of words and have them dive into the etymology of the word and connections these words might have to each other. They can do this as an individual or group activity.

We Do It for U

U has an odd, liminal position in the English language, making it both tricky and exciting as a source of vocabulary. The above lists of vocabulary words should be enough to get you started. When you're ready to add more to your vocabulary or spelling lists, check out WordFinder's list of words that start with the letter U. You can even sort your search results by word length to best fit your students' needs.

Learning about the letter U requires lessons that move beyond memorizing lists to identifying trends and common qualities among sets of words. That kind of deeper understanding is what makes lifelong readers and learners. For more enriching vocabulary and etymology, head on over and hunt through some words starting with X, Y and Z!