Fourth grade grammar should make your toes tingle and your fingers tremble; it's when kids start learning how to coherently weave ideas into one another.

Fourth grade grammar will begin to answer those cries for mercy you muttered to the clouds.

Into the Great Unknown

Irregular verbs are verbs that have rules that no one knows except the verbs themselves. The fourth grade is when those verbs start getting hammered into kids' brains so that they might not mess them up quite so much when they're older.

Irregular verbs are verbs that don't follow normal conjugation rules as they traverse temporal space. They are the source of a great deal of frustration if you let them, but you can have fun with them, too. Swum, for example, is fun to say.

Knowing how to conjugate drink in the third form is great, too. Unfortunately, the only way to learn irregular verbs is to memorize their freaky conjugations as you encounter them. Irregular verbs might be the hardest part of fourth grade grammar, but if you don't get them straight in the fourth grade, you'll be playing catch up for the rest of your life. They're worth spending a little extra time on.

Much of the grammar in the fourth grade will be review of the last few years. After all, kids are about to make a huge jump into speaking like a fully actualized human being-they better have some of the basics down pat.

In short, adverbs are words that describe how. They modify adjectives, verbs, or other adverbs. They often end in -ly, but they don't have to. Some people don't like it when they are placed in the middle of an infinitive form of a verb, as in Captain Kirk's "to boldly go," but "to go boldly" just doesn't have the same punch, does it? By the time a student reaches fourth grade grammar, he or she should be pretty good with adverbs. If she isn't, get on that because it's important. Start with a list of adverbs and practice, practice, practice.

Prepositions describe when or where. Those things are fairly crucial when stringing together any kind of information. Single-word prepositions are easy. In, on, around, above, and many others are on the list of prepositions. Some draconian teachers force their students to list them all in alphabetical order from memory, the purpose of which remains unclear. Preposition lists are boring and useless. Besides, prepositional phrases are what fourth graders are going to start using, and those are super valuable.

Termination punctuation is old hat in the fourth grade, but there will probably be some practice with spotting where a period goes. Fragments simply cannot be tolerated in written communication past the third grade. A fragment is basically a group of words posing as a sentence that on closer inspection is missing one or more of the indispensable components of one. Sentences need at the very least a subject and a verb.

If a student tries something like "Spoke at the party.", their paper will come back with red ink all over it because they haven't written a complete sentence. Sticking a period at the end of a phrase doesn't make it a sentence.

Incomplete sentences have their place, but they are not sentences; don't let your students try to pass them off as such. In the fourth grade, though, students will learn how to splice together ideas with commas so that their sentences can begin to reflect the complexity of thought desired in a developing and intellectually curious mind. The comma will have been introduced in the third grade, but now kids get to have fun with it.

What if you have two ideas that you know belong together? Certain ideas are meant to be together. That's when you use a coordinating conjunction.

The coordinating conjunctions are easy to remember with a mnemonic device: FANBOYS.

If you see one of the FANBOYS, that means you need a comma and a second subject.

I ate, and she talked, but later we danced.

There's even a preposition in there! Notice that there are three different subjects and verbs. That isn't necessary. Theoretically, the subjects and verbs can all be the same, though it wouldn't make much sense. Grammatically, this is correct: "I talked, and I talked, and I talked." The point is to combine ideas into one. Otherwise, it would look like this: "I talked. I talked. I talked." Clearly, those ideas are close enough to be linked up with commas.

Have fun writing stories and having real conversations and epistolary correspondence with your fourth grader. 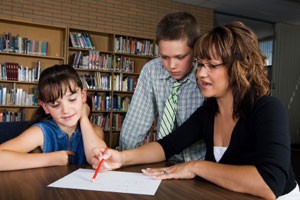