Fifth grade grammar is where students will find out how to construct narratives with paragraphs. They've learned a lot of the building blocks of English in their previous years of education. Indeed, they are already veterans when it comes to combining what they've already culled from their lessons with what they continue to learn. Here, they've seen a lot of big blocks of text, so now its time for them to shape those blocks into chunks of information for others to decipher. In order to mold a paragraph in a decipherable block of info, they need to understand that every paragraph has a main idea.

The main idea is usually one sentence, and in fifth grade grammar, it most certainly. That sentence is what the writer means to tell the reader. Most paragraphs will be about five sentences long, so that means the other four will be there to support the main idea, further describe it, or offer evidence. Remarkably, by learning about main ideas and topic sentences, students are simultaneously learning about thesis statements and rhetoric without even knowing it.

Students will be asked first to spot a main idea in sample paragraphs and then to create their own. For example:

Schnoodles are very intelligent dogs. Their alertness makes them prime candidates to learn new tricks. Schnoodle owners are even frustrated by how cleverly their dogs outsmart them. I have personally trained my dog to speak, dance, and distinguish androids from human beings.

The topic sentence of the sample paragraph above is "Schnoodles are very intelligent dogs" because that's what the paragraph is all about. Everything else is extra information or supporting evidence. It gets a little harder when there are more sentences in the paragraph, but a rule of thumb is that main ideas or topic sentences will be located somewhere near the top. Most writers want to start their paragraphs with their main idea, so it stands to reason.

Homonyms are a lot of fun. They're words that sound or look like other words don't share a meaning. The ones to look out for are:

Those homonyms are not very fun. You have to know them because if you get them wrong, people will think you didn't pay attention in your fifth grade grammar lessons.

Synonyms are words that share meanings or slightly different meanings with other totally different words. Synonyms help students refine their idiolects and say more precisely what they mean.

They also add some diversity to one's speech. Knowing some other words for "go" comes in handy. When it comes to synonyms, the more you know, the smarter you appear.

Even the dumbest person in the world looks pretty smart when he knows a lot of words. Consider Macbeth's response to his assassins when they call themselves men:

MURDERERS: We are men, my liege.

MACBETH: Ay, in the catalogue ye go for men, As hounds and greyhounds, mongrels, spaniels, curs, Sloughs, water-rugs, and demi-wolves are called All by the name of dogs;

Macbeth's intelligence, though he makes plenty of mistakes throughout the play, is never in question. Part of the reason neither audiences nor any other character doubts his wits is lines like these. How many words can you think of for dog? Shakespeare knew way more words than you do, so the bar is pretty high. Shakespeare used 31,645 different words in his collected works and probably could have had Macbeth rattle off a few more dogs. It's hypothesized that he knew over 60,000 whereas the average English speaker in America is said to tread water around 5,000-12,000! There's no need to compete with the greatest writer the world has ever known, but when it comes to synonyms, the more you know the better.

Generally speaking, making plurals in English is as easy as sticking an "s" on at the end of a singular noun. If English were as easy as that, though, where would the fun be in learning it? English is full of irregular plurals, which don't follow any concrete rules. In the fifth grade, students will be tossed headlong into them, and be assured they are treacherous waters.

Irregular plurals are like irregular verbs in that the only way to really know them is to memorize them. Is there a good reason why the plural of child is children? Nope. English doesn't rely on any other reason to do what it does other than it sounds right.

As students enter the fifth grade, they start learning about their world through texts that have been left by great men and women of history. Learning becomes more objective in that is no longer based on unique experience of the world, but on the digestion of other's experiences through words. Writing is the one human act that has no equivalence in the animal kingdom, and human beings learn from each other irrespective of time and space through that act. 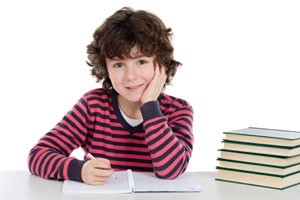