Sixth grade grammar is tricky if you're not careful. Roots, prefixes, and suffixes join forces with pronouns to pepper sixth grader prose, which has no choice but to become more interesting and complex as the burgeoning young person starts reading more complicated material and having ideas of his own.

English has a ton of Latin and Greek. Something about its inauspicious beginnings keeps English operating a major inferiority complex. English often prefers inventing words from roots of other languages over using perfectly good Saxon words. "Submarine craft" should be "underwater boat," but it isn't, so it comes in handy to know some root words. You can make your own words up if you invent something like the telephone, and if you don't invent it, you can at least know what it is.

Roots are the most important things students will learn in the sixth grade. In fact, knowing roots will facilitate not only the command of English but also the acquisition of other languages. Plus, what is cooler than a sixth grade grammarian knowing the difference between an epidemic and a pandemic or that "holographic manuscript" is redundant? Sixth graders will relish the fact that they understand robotics a little more with words like "biomimicry" and "exoskeleton," and will finally know why micodermabrasion is important to a healthy epidermis.

Flash cards work wonderfully when it comes to rote learning, and rote learning might just be the ticket to the carnival when it comes to suffixes, prefixes, and roots. Mr. Hobbs thinks so! Mr. Hobbs has put together this lovely flashcard set for 6th grade root words that will surely rival the root word repertoires of even saltier folks who haven't had the pleasure of thinking about sixth grade grammar in 20 years.

Pronouns are just like regular nouns except they're a bit more professional about it. They can take or leave determiners. Pronouns don't need any help. They're the ones you call when no other noun will do. They are, in brief, very special nouns. I, you, he, she, and it, and all of those words' modified forms, including plural and possessive forms, are pronouns. They're actually quite easy at least ostensibly, but most languages like to differentiate object and subject pronouns. That gets tricky for some people.

An object receives the verb and appears after the verb in an active sentence.

In a sentence like "Jennifer has a robot," robot is the object. With the exception of "it" and "you" all other pronouns change when they are objects of sentences.

If your sixth grader knows when to use "me" and when to use "I," he or she is already has a better command of the English language than about 92% of all English speakers.

The sixth grade is filled with difficult things to remember. It's easy to get caught up in minutia and drill-and-kill learning, but remember that your young grammarian is not a robot. If you can get a sixth grader to learn a few of the aforementioned points without abominating the language, you've done at least a million times better than Teddy Ruxpin ever could. 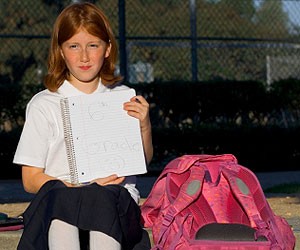