Seventh grade grammar is an amalgam of everything that students have learned in language arts thus far. This is the grade level when most students combine everything they have learned and they begin to concentrate on the full picture of grammar, not just the individual rules.

By the seventh grade a student will understand parts of speech, pronouns, clauses, and punctuation and will be actively using them in their communication - in class and social discussions as well as in written assignments such as book reports, learning logs, journals, and reports.

Seventh grade grammar goal should focus on the correct use of what the student has already learned.

Know How to Use Parts of Speech

Seventh grade grammar tends to be more about using grammar than learning it, and knowing your parts of speech enables you to talk about writing selections. Grammar becomes another weapon in the critical thinking arsenal.

Knowing the purposes and locations of different parts of speech lends validity to opinions about literature.

Understand the Different Types of Speech

In addition to learning how to appropriately support opinions, one must also learn what types of speech to use in different situations. For example:

Wise adults know that different grammar is expected in different situations. You wouldn't use the same grammar in conversations with friends and family as you might in a meeting or at a dinner party.

In group work, the language should begin to resemble that of the business meeting - speaking in a way that is both assertive and respectful, that creates an inclusive unit while maintaining individual identities.

Consider the difference between these examples:

Knowing how to express yourself in various situations is a key learning goal for seventh graders.

It doesn't take much for a sentence to get extremely long. In a long sentence you can easily have quite a few words between the verb and subject. When verbs don't agree with their subjects, it's a sure sign that the author didn't pay enough attention when he or she proofread. 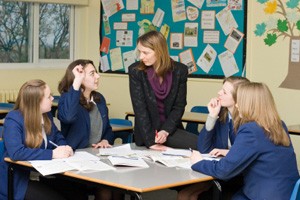