Everything about life changes in the ninth grade, even the most familiar things seem to be totally new. Ninth grade grammar becomes serious business now because it's integral to progress in all subjects. Students will be expected to have their grammar skills straight because they'll be expected to write in every one of their classes in the future. Sure, there's still an English class, but good grammar is already supposed to be in play. Thus, ninth grade grammar is a collection of skills of which absence is intolerable.

Run Over Fragments - Not on Them!

Run-ons might have been giving students trouble all through middle school, but now they are simply inexcusable and grade-killers. If a students turns in a paper filled with run-on sentences, they will get it back looking like it was corrected in a slaughterhouse. One way to keep a teacher's red marker from going dry is to be resolute and diligent when it comes to avoiding run-ons.

A run-on happens when students combine two sentences without the necessary coordinating or subordinating conjunction. Sometimes it stems from a fear of commas. Learn those comma rules! Sometimes run-on sentences come from haste or laziness. If students don't run around like their heads have been chopped off, and if they don't fall in with a lackadaisical crowd, they can keep run-ons to a minimum even if they are unable to overcome their fear of commas.

Here are some examples of what not to do:

Fragments happen when students forget what makes a sentence. They are phrases that might look like sentences but are lacking the components necessary to presenting complete thoughts.

Aside from a few very rare exceptions, all sentences should have at least a subject and and a verb. If you see a sentence without one of those, it's not a sentence but a fragment. Fragments will ruin a ninth-grader's hopes for success because no matter which subject he's writing for, fragments will drain all sense from his paper.

Here are some examples of what not to do:

Who v. Whom for Serious Ninth Grade Grammar

Grammar is something that one should practice enough to make second nature rather than always be on a person's mind. No one likes a grammar Nazi. That stated, being serious about the difference between who and whom is a perfect way for a ninth-grader to shine.

Whom is a word that not everyone uses in spoken English. Even people who know the difference between whom and its shorter brother often neglect it when they're speaking. That makes is harder to remember because whom isn't always around. Also, since they both appear in questions, a form not usually covered that much in classrooms, students are frequently unsure. Some teachers have even started letting such negligence slide! There's no reason to; it's easy as shooting chickens in a barrel.

Who is a subject and whom is an object. It's just that easy. Who does things and whom gets things done to it.

Who is making the sandwiches?

For whom are the sandwiches?

To whom are you speaking?

There's a great worksheet here to practice who and whom a bit more.

Tell your ninth-graders not to be chickens when it comes to new things, and they'll be fine as far as grammar is concerned. 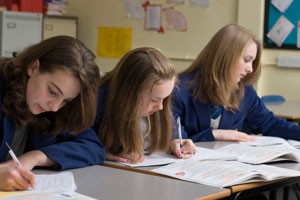