This synopsis of Gift of the Magi literary terms includes the terms referenced directly from the short story. This well known story, created by O. Henry (William Sydney Porter) and first published in 1906, shows the selfishness or foolishness of a young couple at Christmas time. Eager to please the other with a spectacular gift, they sell their most prized possessions to have enough money to purchase the other a gift. She sells her hair to buy him a watch fob; he sells his watch to buy her tortoise shell hair combs. 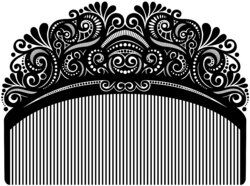 Narrator: The story is told in the third person point of view through a mostly omniscient narrator.

Setting: The story takes place in New York City. While the setting is not exactly stated, the author infers this setting by mentioning Coney Island, a well known area landmark.

Theme: The central idea in this story is the love between Delia and James and the sacrifices that they make to please the other.

Climax: The most exciting part of the story is when the characters exchange gifts. Everything in the story leads up to that particular moment.

Resolution: The story wraps up quickly after the climax when the characters realize what they have sacrificed for each other.

Repetition: The number three figures prominently throughout the story. Parts of the dialogue, events, characters, and other elements all come in threes. Some examples include:

Irony: One type of irony can be seen in this story, situational irony. By selling their most prized possessions to buy something for the other, they wind up selling that which they need to use the gifts the other has given.

Many students have a difficult time analyzing literature, especially short pieces. These Gift of the Magi literary terms are meant to help readers delve deeper into the story to gain alternate perspectives of the events. A careful reading of any story will yield similar results. Literary analysis remains an important part of the curriculum for a variety of reasons. For one, it helps us understand our world and the world around us, especially different places and times. Yet many stories, such as the Gift of the Magi, endure because of their timelessness.