Teachers introduce many literary terms to high school students early in their English classes. Many of these terms are repeated through each successive year. Students benefit by applying what they have learned about these terms when interpreting novels they read for school, as well as other reading materials and even movies. Discover 33 must-know high school literary terms. 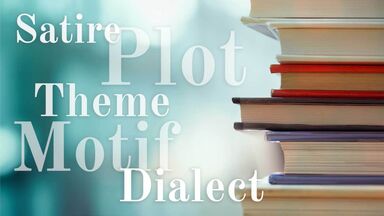 Genre refers to the overall type or category into which a work of literature fits. Genre can refer to high-level distinctions like fiction and nonfiction or to much more specific categories. Having these categories for literature makes it easier and more instructive to analyze literary works. There are many genre examples.

Structure refers to the distinct components of the literary work. Fiction or nonfiction, poetry or prose, all literature has some structure by which it conveys meaning to the reader. Many literary devices affect a work's structure.

Tone is the overall sense the author seeks to induce in the reader. Fundamentally, using tone in literature is no different than using tone in speech. By changing emphasis, structure or context, a literary work can change not just what the reader is reading, but what impression the reader receives. There are many examples of how tone functions as a literary device.

Voice is one of the most important literary devices in making a work unique. Voice can overlap with tone, but it represents a fundamentally different concept. While tone comes down to what is conveyed to the reader, voice is a question of how the writer "sounds" throughout the work. No two writers "sound" exactly alike, just as no two speakers sound exactly alike. Note that literary voice goes beyond grammatical voice. The "voice" of a piece of literature refers to the unique tonal and creative elements that make it what it is, not just verb tenses.

The study of literature can be daunting. In a category that contains literally everything ever written down, it can be hard to know where to start or what matters. These terms represent starting points for literary terms and literary devices high school students need to know. You may find it helpful to review some basic types of literary devices in addition to the terminology shared here. To go even deeper into literature, consider testing your knowledge with this literary terms worksheet.