Lesson Plans on Writing a Script

Actors and writers alike enroll in screenwriting classes to learn how to write television or movie scripts. Scriptwriting is also a great outlet for middle and high schoolers to practice their writing skills. 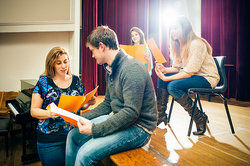 Lesson Plans on Writing a Script

The key to scriptwriting is the character development and the formatting of the script. Much different than a novel, a script is character-centric. Conveying this notion in lesson plans on writing a script may prove to be a bit challenging, particularly because the student may be very excited by the creative aspect of the project, but may become bored with the learning process.

The above lesson plan can also be implemented by assigning a book like The Great Gatsby to the class to read and then have them write a script scene based on one of the chapters of the book.

A lesson plan on character development would include an activity on dialogue development. For example:

These lesson plans will give teachers direction on the objectives they should have and how to structure their lessons on scriptwriting with creativity.