Teach Kids How to Write Haiku in 8 Easy Steps

When teaching haiku, an educator should begin by explaining what haiku is, how it is constructed, and share examples of this poetry. Then, students can learn how to write a haiku for kids. 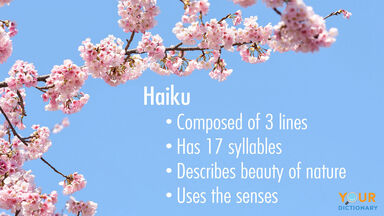 How to Write a Haiku for Kids

Haiku is a form of poetry that began in Japan. Haiku uses the senses to describe scenes from nature and often involves vivid images of trees, plants, seasons, and other elements of the natural world. Therefore, it's different from the typical acrostic or rhyming poem kids are used to.

However, teaching haiku poems to kids isn't as hard as you think. As long as you break the process down into steps and remind them of syllables, then they have a great base for getting started. Explore the steps to creating a haiku poem for kids.

Step 1: Explain What a Haiku Is

Explain what haiku is, the history behind it and how it is a brilliant way to express the beauty that is in nature. Show them several examples like funny haiku or traditional haiku poems.

Step 2: Construction of a Haiku

Point out the five-seven-five rule regarding the syllable construction of haiku. A haiku is comprised of three lines and a total of 17 syllables broken up into a five-seven-five pattern as follows:

Make sure that your students understand how to determine syllables in words, and review with them how to use a dictionary to find syllables when necessary. To help students with syllables, have them clap the words of each line of a haiku and count with each clap.

Brainstorm a subject and title for the haiku. Because haiku describes the natural world, have students write a list of subjects, which can include animals, seasons, physical scenes, and more. For example, they might write about winter, water, summer, wind, trees, leaves, jumping in a puddle, the list goes on.

Once your students have determined the subject and title for their haiku, have them begin writing lists of words that describe their subject. Of course, not all of these terms will be utilized in their final poem, but a robust and descriptive list will give them a lot of words to choose from when drafting their haiku.

Step 6: Start Writing the First Line of the Haiku

Have them begin with their first line of five syllables. Teach your kids to describe ideas, being as vivid as possible, rather than trying to construct sentences or complete thoughts.

Step 7: Create the Second Line of the Haiku

As they proceed to their second and longer line of seven syllables, your students want to further the idea captured by the haiku. Remember to use ample praise and to guide them when they are stuck, offering suggestions for word usage.

When they finish their haiku with the third line of five syllables, remind them that this line can be one or two words, and again, that they should aim for simplicity.

To have your students understand and appreciate haiku, you should share with them several examples of this form of poetry.

Here is a sample haiku by acclaimed Japanese poet Basho. It looks at a frog jumping into a pond.

An old silent pond...
A frog jumps into the pond, splash!
Silence again.

This original haiku explores the calm before a storm rolls in on a lake or ocean.

You can also share with the class haiku that you or previous students have written, and remind them of the simplicity and beauty of all haiku, regardless of its authoring.

Tips and Tricks to Encourage Kids to Write Haiku

To teach kids how to write haiku, try to use encouragement and rewards to capture their imagination throughout the process. You can do this by beautifully publishing their haiku and having the student decorate the poem with scenes appropriate to their subject matter. Here are a few ways that you can "publish" your students' decorated haiku poetry:

Teachers should be enthusiastic about haiku's beauty, and help students fall in love with this form of poetry.

Once kids get the hang of writing a haiku poem, they will enjoy the process and creativity. It might take a bit of encouragement at first, but with time, kids might start creating haiku poems on their own. You can also find more information about the rules of haiku.