English and language arts teachers must contend with what seems like a full-on assault of grammar teaching these days, yet the teaching must go on. For basic concepts such as verbs and nouns, the process can be relatively easy. However, for more difficult topics (especially when teaching non-native English speakers) such as articles and determiners, it becomes difficult to keep the students engaged enough for them to internalize the concepts. 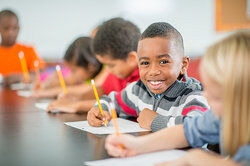 Articles and determiners need not take up too much class time as long as you begin with the easier concept, build on what the students have already learned, and incorporate exercises that make learning grammar a bit less tedious.

If a noun is singular and countable, explain that an article is nearly always necessary.

Articles are among the more common determiners in the English language, used frequently and in nearly every context and type of writing.

When teaching articles and determiners, make sure you point out that the purpose of the articles is to demonstrate whether that which is being indicated, in speech or in writing, is definite or indefinite.

An indefinite article (a, an) is used when that which is being indicated is non-specific. For example, explain that if you were you say "a car drove by," it would mean something very different than the definite "the car drove by," indicating specificity.

Articles are three of about 50 determiners used in the English language.

Once these two concepts have been explained and the students have demonstrated understanding, it's time to move on to different types of determiners.

Determiners determine the character of a noun, and as with articles, impart certain characteristics. While the articles demonstrate specificity, other determiners might demonstrate the quantity, possession, or nearness to the speaker.

By now, you will have built the foundation on which more difficult concepts can be layered without too much frustration.

The Internet is one of the greatest teaching resources available. There are interactive exams, quizzes, and game ideas for you to try in the classroom that demonstrate the distinction between articles and determiners and can help you flesh out the concepts in a fun way.

Whatever age level you teach, make sure to incorporate some measure of activity into the learning process.

A huge part of the fight against the anti-grammar mentality is battling the notion that grammar is necessarily boring. It is not! Grammar can be interesting and exciting, and as students make the connections between language that they know and understand and the new concepts they are beginning to learn, chances are they'll think it's fun too.

These concepts may be difficult for some, but they are far from out of reach-whether your student is a native English speaker or not.