It's important for upper elementary students to learn how to decipher what unfamiliar words mean when they're exposed to new terminology in books or other materials they are reading. Use this context clues lesson plan to help your students discover how to do just that. 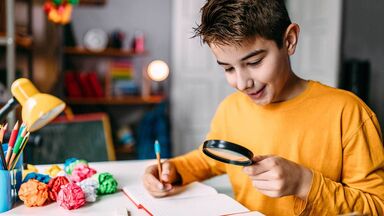 As a result of completing this lesson, students will be able to identify four types of context clues. They will also be able to use context clues as a tool to determine the meaning of new vocabulary terms.

Explain that context clues are information provided in text that can help readers decode what unfamiliar words mean.

Tell students that synonyms are the first type of context clue. Ask students what a synonym is, providing feedback and following up with questions to get the correct answer. When students specify that a synonym is a word with the same meaning as another word, discuss how synonyms can serve as context clues.

Share with students that context clues can also be antonyms. Ask students what an antonym is, again leading a discussion to get to the correct answer. When students indicate that antonyms are words with opposite meanings, discuss how antonyms can provide context clues to unfamiliar terms.

Explain that synonyms and antonyms aren't the only types of context clues. Let students know that writers often provide examples as context clues to help readers figure out the meaning of a term that isn't familiar to them.

Share that writers sometimes directly explain unfamiliar words rather than using synonyms, antonyms or examples as context clues. This is most common when the writer knows that the intended audience isn't likely to know the meaning of a certain word, such as a technical or scientific term, jargon or words beyond readers' grade level.

Once you have thoroughly covered context clues and addressed any questions your students might have, it's time to reinforce student learning. Use this quick, age-appropriate video to provide multimedia reinforcement. The video lasts just under four minutes.

Once students have watched the video, lead a discussion and brainstorm.

Assign an activity in which students are tasked with identifying context clues. You can do this as an in-class group or partner activity, or assign it as homework.

Provide students with the following sentences and ask them to write a definition of what the bold word means based on the context clues in the sentence. Tell them that their task is to come up with a definition that will help a second or third grader understand the overall meaning of what they're trying to get across.

Answers may vary; review to ensure that students have gotten the gist of each of the unfamiliar words, providing feedback as needed. Answers may include:

Provide feedback to students specific to their answers, being sure to ask them to consider if they would have understood the definition they came up with when they were in the second or third grade. Allow students who need additional practice to try again by re-doing the assignment.

This activity will help get students focused on looking for context clues as they read and analyze what they have read.

Once you have covered the content in this lesson, ask students a few questions to help them know when and how to apply what they have learned. Consider leading a discussion that includes any or all of the following topics. Provide feedback throughout the discussions, keeping students engaged but ensuring that concepts are being reinforced accurately.

Make the Lesson Plan Your Own

Like many lesson plans, this one can be tweaked in order to fit your individual needs. However, this model is a framework for you to use in its entirety or to take bits and pieces to create a lesson plan on context clues that is appropriate for the students in your class. Review these tips for writing lesson plans for suggestions or how to expand this lesson plan or write your own.