First grade spelling words are, for most kids, the first words they will actually be expected to know in school. First grade is the place where they will pick up a boat-load of new words and be tested on almost all of them. It can be pretty intimidating, but it can also be some of the most exciting times in one's life. After all, it's their first foray into the realm of grownups. Spelling plagues many adults for life, but that shouldn't be the case. If you do right by your first-graders, they'll be on their way to being grammarians and spelling bee champions in no time.

Syllabification is as amusing to write as it is to say. It's also delightful to practice with children. Usually, they clap out the syllables of words as they say them. For example, a word like "cat" gets one clap, a word like "dragon" gets two claps, and so on. Syllabification is important to first grade spelling words because it trains them to listen to the way words are broken up and put together. When they listen to rhythms, they're also listening to the sounds letters make without even knowing it. Between the syllables, they start to hear the shifts their mouths are making.

Since spelling is the practice of coding and decoding patterns of sounds, starting with a pattern as easy as clapping hands is perfect. Also, it turns leaning into a game that's familiar. In kindergarten, they did a lot of hand-clapping and singing, now they'll be applying those skills to acquire new ones. Who knew first grade spelling words could be so much fun?

If children don't understand the significance of spelling, then they won't ever really want to do it. Teaching them with pictures helps. After all, words are pictures of objects and ideas. Pointing at a picture of a dog and saying "dog" is akin to pointing at three letters and saying "dog." Kids can understand the concept of sight recognition; that's how they've learned pretty much every word they know so far.

Explain to them that human beings can't go around drawing pictures of dogs all the time, and that people have come up with a whole different set of symbols to represent the things they encounter in the world. Ask them to draw symbols for words. Can they think of symbols for love, happiness, and good will, as easily as they have for dog and cat? Probably not. Luckily spelling is a less-than-perfect system to keep everyone able to communicate with one another.

Playing games with cards that have illustrations of objects and ideas on one side and written out words on the other is another good way of getting kids to start thinking about matching words with their meanings. Eventually, they won't need the cards and will be asking how to spell things they come across in the classroom and beyond.

One of the strangest things that starts happening with kids in the first grade is that they begin to really develop a sense of self. It has to have something to do with seeing their names on paper more often. Every paper they receive or turn in to their teachers has their names on the tops. Those squiggly lines called letters that make up their names are who people are somehow. Spelling one's own name is a very visceral experience. Encourage them to write their names millions of times.

Contractions Are Not Cheating

Sometimes words lose their letters because it takes too long to say them. Often it's because people like to combine two words into one. When words drop letters, writers have to compensate with apostrophes. The apostrophe is a versatile punctuation mark and in the first grade, kids start to experiment with it. They'll learn a few possessives, but what really blows them away are contractions because skipping a letter seems like you're getting out of work or something.

But they aren't cheating; they're following the rules. Contractions are legitimate forms of words that look like they're breaking the law. Encourage students to use them. Except for "ain't," they are all completely acceptable. "Ain't," by the way, existed for a very long time along side "isn't" until schoolmasters arbitrarily declared the latter preferable to the former. 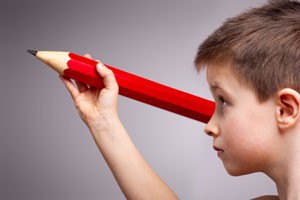