Book, shook, took, put, and foot, all share a weird sound. That weird sound is called a diphthong, and words with diphthongs are some of the funnest in the language. How does the human mouth figure out how to turn two O's or a U into such a strange sound? It combines two sounds into one, and what comes out is something entirely different from a word like "shoot." Students get to explore the world of diphthongs in the third grade, and that's a real treat. Don't shy away from telling your students and children about how funny and miraculous diphthongs are.

A Why for Every Wherefore

Y is by far the most fascinating letter in English. Students know it as the one right before "and" in the alphabet song, but it's so much more than that. It's a consonant that behaves like a vowel, and when words ending in Y are pluralized, the Y almost always turns into "ies."

Also, Y can sound totally different depending on the word it's in. "Why" is different from "every"and "rhythm" is different from "spray." Y seems to sound however it wants whenever it wants. Don't cry, though. Life's too short. Y is like the outlaw letter, so it has a lot of intrigue surrounding it, like Billy the Kid. Get your kids excited about this rogue of a letter, and they'll be fine.

Double Down on Double Consonants

Long and Short of It

One of the greatest strengths of English is its ability to create compound words. If a father is grand, English-speakers call him a grandfather. If you want to talk about work you do at home, you say homework. Corn that's popped is called popcorn. English doesn't let its speakers combine whatever they want, but in the third grade, students will start learning some of the times when they can.

Homophones are some of the most fun and confusing things in any language, but especially English. There, their, and they're are important to discern between because they, like all other homophones, will not show up in a software spellcheck. The only way to catch them is to know them. Hour and our, nose and knows, and tail and tale, are all important words to know apart.

Most teachers will start with around 20 words and add more every week. A good place to start is with the Dolch sight words for 3rd grade.

The spelling tests will get longer as the year progresses, and students won't know which words will repeat from one week to the next. That means that students will have to study all of the old words in addition to their weekly new ones. The best way to keep old words in their heads is with flashcards.

As they approach their 12th week of the year, the flashcards from their first week will start to look a little ragged, but that's OK. A used flashcard is a good one. If they're using them, they're remembering the words. There's also a degree of pride and self-esteem that comes with amassing a huge stack of flashcards. It becomes a testament to their progress and should not go unnoticed by grown-ups they're hoping to impress. 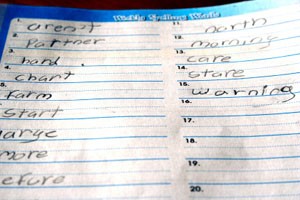