Sixth grade spelling words are an English speaker's first foray into the the sophisticated realms of orthography. They'll start learning about the patterns inherent to English spelling and hopefully come out of the sixth grade with a broader understanding of the language as a whole. 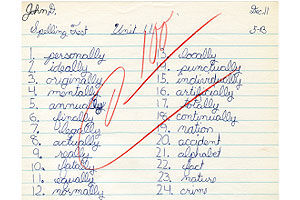 Vowels are A, E, I, O, and U, and consonants are all the other letters in the alphabet. Dividing the alphabet into two distinct parts is helpful because it enables writers of English to deduce how even unfamiliar words sound. By investigating the ways in which different consonants and vowels interact with one another, spelling becomes not only a thing learned for learning's sake, but a highly beneficial tool.

Sixth grade spelling words will teach students how vowels behave when located next to one another and how they act when separated by clusters of consonants.

The shorthand linguists use to talk about vowel/consonant structures in words is C and V, respectively.

As kids get older, the words get longer. One of the best ways to get a hold of multi-syllabic words is to start noticing the patterns in them.

When vowels stand next to each other in a word, they regularly do very odd and confusing things. One of the oddest things they do is break a syllable between them. Words like create, idiom, and coagulate all show the VV pattern. The more students see the VV pattern, the easier it becomes to read words containing a double vowel syllable break. Sixth-graders will see many such words this year.

Many words in English separate two syllables with only one consonant. It's helpful to fully grasp this pattern because it comes up quite a bit. Credit, evil, behave, robot, select, and police are all very snappy, quick words because only one consonant stands between the vowels making the noise. It's as if the mind wants to put those vowels as close together as possible and rushes through the rest of the words to make that happen.

With practice, sixth-graders will start to train their ear to the sound of words and know how to spell them from an acquired instinct.

In slower words syllables are often separated by two consonants. Permit, subject, custom, and publish all seem to pause in the middle for a moment longer than words in the VCV pattern. Notice also that these examples illustrate how the sound of words can change between syllables in VCCV, e.g., one can easily hear the difference between the S and T in custom.

Listen for the pause; words like pattern and bubble follow the VCCV pattern, too, with no shift in sound, but they still hang for a very slight moment on their double consonants. Most of video game-playing skill comes from noticing patterns in timing, so this should be a cinch.

Sixth-graders should be pretty net-savvy by now, so they should scour the Internet for a good word list. Word lists do not vary too much from school to school in the US, and even if they study the wrong words, they will still be getting the patterns down.

Here is a great place for kids sixth grade and older to find word games that will help them spell better.

Online games and the Internet in general are becoming an increasingly valuable tool for educating young people. For now, it's still a fun place where they can work and learn without much pressure or fear. Exploit their intrepid relationship with the Internet and encourage them to use it to learn their spelling words.