The greatest thing about seventh grade spelling words is the same thing that's wonderful about all of language arts in the seventh grade: utility. For the first time, learning English is not just for learning's sake. The things students learn in the seventh grade, including spelling, are important to the daily lives of ordinary citizens. 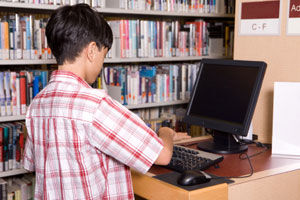 They will start gathering facts and coming to their own conclusions on important issues, the kinds of issues about which individuals have different opinions. Indeed, if you want your students to take anything out of middle school, you'll want to impress upon them the importance of what they learn on their future selves.

Sure, convincing students that what they're doing in school has real-world applications is always challenging, but it has never been more true for students before the seventh grade. They are becoming adults, and their spelling skills will reflect that. In a way, they are becoming individuals. Figuring out who those individuals are turns them into introspective detectives. It is a very thrilling time for all.

Case of the Disappearing Syllable

Probably the hardest group of seventh grade spelling words to master are the ones that have lost a syllable. Some speakers will pronounce the syllables in some of the words, but for whatever reason, history has decided to obfuscate them, making them so difficult to spell, students will have to do a little rote learning. After all, they're not out of middle school just yet.

Here are some examples of words that time has let get lazy:

Memorize them; it's the only way.

The letter "A" is the most common letter in English. It also happens to make a ton of sounds. An "A" can make. In the seventh grade, students will explore every type of "A" sound, and they'll know them up and down and backwards and forwards. It will be their favorite letter.

Check out the difference between these words:

Why each word has a different sounding "A" is up to you to figure out, but there are some nice rules of thumb that might help.

Of course, rules of thumb only work in a jam, but they're good starting points when decoding how words sound.

In the seventh grade spelling words, many funny characters abound. They will sneak up on you if you let them. Seventh-graders should be aware of doubled consonants and how hard they are to hear.

Here are a couple to look out for:

Unfortunately, there's not much rhyme or reason when it comes to double consonants. Some teachers will try to explain rules for them, but the rules are just guidelines, and the only way to really overcome the obstacle is by brute force. When students come across a word with double consonants, they should write them down and go over the ones they already know. If they keep at it, they'll have a hefty collection of words under their belts.

Study the double consonants a little extra, and seventh-graders should be fine.