It's very important for students to learn the different types of syllables early in their language arts education. Use these tips and the printable chart to help you teach syllable types in a way that learners will be able to understand and remember. 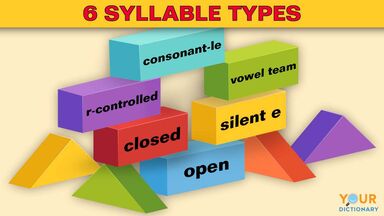 Syllables are components of words, which makes them the most basic building blocks of language arts education. Learning the different types of syllables provides students with strategies they can use to figure out how to properly read, sound out, spell, and pronounce words. Teaching syllable types, which can also be called syllable patterns, to people who are just starting to master English language arts can really help set up learners for success.

Use the printable chart as a tool when teaching the six basic syllable types. Simply click the image below to download the chart as a PDF file. Provide a printed or electronic copy to students to use as a reference during lessons and while studying. Use this guide to printables if you need assistance downloading the chart.

Before you start teaching syllable types, make sure that students can differentiate vowels from consonants and that they know the difference between short vowel sounds and long vowel sounds. Once students have mastered those language arts skills, it's time to focus on teaching the six types of simple syllables.

Examples of words with open syllables include hotel (ho●tel) and maple (ma●ple).

Teaching tip: Help students remember how to pronounce open syllables by explaining that because the vowel doesn't have another letter after it, that means it is open. Since the vowel is open rather than being closed in by another letter, then it should "say its name" when spoken. This, of course, means that the vowel should be pronounced with the long vowel sound.

Examples of words with closed syllables include dot and welcome (wel●come).

Teaching tip: The vowel is closed in by a consonant at the end of the syllable, so it can’t say it’s name. As a result, when pronouncing closed syllables, students should remember to use the short sound for the vowel.

Examples of words with silent "e" syllables include spoke and compete (com●pete).

Teaching tip: To help students recognize syllables that have a silent "e," encourage them to look for words that end with "e," then check the two preceding letters. If the letter before the "e" is a consonant and the letter before that consonant is a vowel, that means this is a silent "e" syllable. This is where the "magic e" concept really helps. Tell students that when they find the vowel-consonant-e pattern in a word, that means that the "e" has magic powers. It can jump back over the constant and make the other vowel have a long sound. That's the complete job of the "e" in this syllable, so it remains silent when the syllable is spoken.

Teaching tip: Have students practice pronouncing words that end in -er, -or, -it, -ur, and -ar so they can get familiar with the various ways that the letter "r" can impact how a preceding vowel is pronounced. Once they have done so, give them a few closed syllable words that can form new words by adding an "r." (For example, cat becomes cart, pot becomes port, bat becomes Bart, and so forth). Walk them through forming new r-controlled words and practice saying them along so they can see how that bossy "r" changes things around.

Vowel team syllables are ones that have two vowels side-by-side that combine to make a single vowel sound. Syllables that include diphthongs (such as ou, ow, oi, and oy) are included in this category. These syllables have:

Examples of words with vowel team syllables include boat and meaning (mean●ing).

Teaching tip: Start by having students mark syllable divisions in words, then circle pairs of vowels that fall within the same syllable of a word. This will help them start to recognize vowel teams as a single unit. Include some words where vowels are side-by-side but are in different syllables, such as li●on and me●an●der. This will help students learn to differentiate vowel pairs from side-by-side vowels in different syllables.

Consonant-le syllables are ones in which the last two letters are -le, and those letters are preceded by a consonant. The "e" is silent. These syllables:

Teaching tip: Let students know that the trick to recognizing this syllable type is that it always happens at the end of a word. Any time they see a word that ends with -le and the letter before the "l" is a consonant, they are looking at an example of the consonant-le syllable type. Share a few non-examples, such as ale and bale, so they'll be clear on when a word with an -le at the end doesn't fall into this category.

Integrate Syllable Types Into Other Lessons

Once you have covered syllable types with your students, reinforce the information by encouraging students to apply what they have learned in other lessons. Start by encouraging them to identify the various syllable types in the words on their spelling lists. Consider incorporating this strategy in vocabulary lessons as well. From there, explore some additional creative strategies for teaching new vocabulary words.