Observation vs. Inference: Identifying the Difference

It's important for students to learn what observations and inferences are, as well as to be able to tell the difference between them. Teaching these concepts starts with definitions, but students also need to be able to apply what these words mean to real-life scenarios. Use these activities to help your students learn how to differentiate between observation vs. inference. 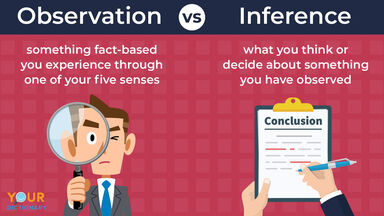 An observation is something that you experience directly, through one of your five senses (sight, hearing, smell, taste, and touch). Observations do not involve making assumptions, guessing or otherwise assigning meaning beyond what you directly experience. They are fact-based, as they only include your direct experience. There are many examples of observations.

An inference is a conclusion that you reach after an observation. It is what you think or decide about something that you have observed. Inferences involve drawing conclusions in order to assign meaning to what was observed. Inferences are based on other information beyond just the observation, such as context clues, past experience, or other factors. There are many examples of inferences.

Making Sense of the Difference

To help students understand the difference between observations and inferences, go through a few examples with them. Link an observation directly to one of the five senses, then, give an example of an inference that could be made based on the observation.

For further reinforcement, assign students to complete this printable observation and inference worksheet. The worksheet below features a picture of several people preparing a meal in the kitchen. Students will be tasked with reviewing the picture and a series of statements to determine if each statement is an observation or an inference. A complete answer key is included.

Once students are familiar with the concepts of observation and inference, use this two-part educational activity to reinforce and help them learn to apply their new knowledge.

Part 1: Start With Observations Only

Start with an activity that is based solely on making observations, to be sure that students can practice describing things without making inferences about what they have observed. Use an object that students are familiar with, that you have on hand in the classroom or that you can easily show via an image. A plant or desk could work, as well as any other item appropriate for students to describe.

To conclude the first part of the exercise, lead a class discussion that includes a review of the definition of observation and an opportunity for students to share what they learned from this activity. Leave the observations on the board, as they'll be needed for part two of the activity.

Part 2: Move From Observation to Inferences

Once students have completed the observation-only activity, build on what they have done with an exercise focused on drawing inferences from the observations made in the first part of this activity. Start by reviewing the definition of inference. Discuss, then segue into a group activity.

To conclude this part of the activity, lead a discussion about the experience of making observations and applying inferences. Ask students to share how they can use what they learned in their daily activities and school work. If they don't come up with options right away, give them some context. For example, ask how observations and inferences could help keep them from jumping to incorrect conclusions about other people, or how they can be used to help strategize when playing games or participating in sports.

Teaching students how to tell the difference between inferences vs. observations will help them master important critical thinking skills. They'll continue to use this knowledge throughout all of their years in school, and beyond into adulthood. Once students have learned these concepts, you may want to start introducing them to the scientific method.