How to Teach Phonics Simply & Clearly to Kids

Teaching phonics involves helping people learn and apply the relationships that exist between sounds and letters, which are generally predictable. Through phonics, kids are able to master the art of sounding out words. Whether you're teaching a child how to read who has not yet been exposed to phonics at all or you're working with a young learner to help reinforce what they are learning in school, these strategies for how to teach phonics can help. 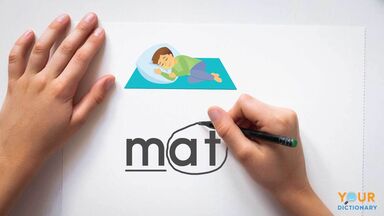 Phonics is a way of teaching people how to read and write that emphasizes how the letters used to write words are related to the sounds made when words are spoken aloud. It is based on the alphabetic principle, which simply conveys that individual letters and combinations of letters are used to represent certain sounds in words.

How to Teach Phonics to Kids

The first thing kids need to learn in phonics is what the various letters sound like. Start with some short, simple words like these three-letter words for pre-readers. Choose a word to start with, then focus on helping kids master the sound made by the first letter of that word. Say, for example, you choose the word "mat." Follow the steps below to teach kids to read the word "mat."

Step 2: Sound Out the Rest of the Word

Once students can recognize and make the sound of the first letter, move on to the rest of the word. This is why it's important to begin with a very short word. Reserve longer words for learners who have already mastered basic phonics strategies.

Step 3: Put the Sounds Together

Now that the child knows that "m" sounds like "mmmm" and that "at" is pronounced as /æt/, it's time to put the sounds together to form a word.

Step 4: Apply Phonics to Other Words

Explain that the student can apply this technique to sound out other somewhat similar words. Say something like, "Now that you know what "at" sounds like, in order to read other words with this combination, you'll just need to be able to figure out the sound of the other letter(s). Isn't that great? Are you ready to try?"

Covering All the Sounds

Once students see how learning the sounds of each letter can help them read, you'll be able to motivate them to want to learn all of the sounds. That's the next step in teaching phonics. Young learners are sure to love the fun alphabet song video below, and it's a fabulous tool for teaching phonics.

It's important to reinforce phonics learning with kids so that they build a solid foundation for reading. There are many ways to do this.

Phonics learning builds on the basics above, moving from simple words that are more complex. Resist the temptation to start explaining all the exceptions in the English language as you move through the predictable patterns. That will come later. Students need to master rules and patterns that are usually correct before dealing with the complexity of the English language. Instead, expand the lessons to incorporate simple strategies for teaching sight words. There are sight word lists for kids from pre-k all the way through elementary school.