Memorizing multiplication facts helps elementary students learn more complex mathematical skills later on. But flashcards and multiplication drills may not be the best way to reach all elementary students, especially those who learn better with conceptual and reasoning strategies rather than rote memorization. Learn how to teach multiplication in a more incremental and intuitive way with these tips and fun activities designed for parents and teachers. 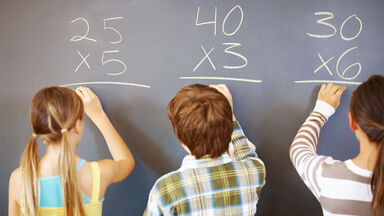 Arrays, which are ordered arrangements of items, are an effective tool for learning multiplication. Some ideas for teaching repeated addition with arrays include:

Focus on Zeroes and Ones

In multiplication, the zero property (anything multiplied by 0 is 0) and the identity property (multiplying a number by 1 doesn't change its identity) are good basic skills to master. Helping students understand these properties can be easy and fun with these tips:

The commutative property defines equations as reversible — that is, 3 x 4 has the same result as 4 x 3. This can be confusing for students who have only memorized multiplication facts, so you can reinforce it in the following ways:

Memorizing multiplication tables is a lot of work. There's nothing wrong with a trick or two to make them a little easier! Popular multiplication tricks and shortcuts include:

Once students conceptually understand multiplication facts and are ready to learn how to memorize the multiplication table, they're ready for the classics. These activities are best when helping students solve multiplication problems more quickly, rather than learning them for the first time. Classic multiplication ideas include:

Many students learn best by doing projects or activities. Use these engaging activities to reinforce multiplication skills:

Math can be way more fun — and effective — when you know how to teach multiplication in a conceptual way before focusing on memorization. Once students can multiply numbers 1-12, infinity is the limit! Keep the math engagement going with these tips for teaching math to English learners. You can also learn all about long division with the steps to long division problems (with answers).